I have a new sculpture posted in my Shop that I totally procrastinated on photographing. We had a smidgen of sunshine this morning, so I thought, “it’s now or never!” and broke out the trusty tripod.

I started making spike-covered sculptures back in college. I discovered the habit in my second ceramics class, as I covered a little pinch-pot with spikes on a whim, and just about all of my classmates flipped out over it. I thought to myself, “I think I’m on to something here…”

I’ve been making spiky sculptures ever since. As you can imagine, I’ve become very proficient at making cones; I’m a veritable cone-making machine when I’m working on one of these. It’s a necessity, really, when even a medium-sized sculpture like this one will take probably over 20 hours to cover with spikes (and that’s just a guesstimate, I’ve never timed myself).

I had taken a bit of a break from making sculptures for a little while (especially after my last spiky piece actually cracked in the kiln and I was a bit heart-broken). I’ve been so busy with my regular (i.e. sell-able) inventory and custom orders, that making a time consuming spiky sculpture seemed indulgent, if not simply a waste of my precious time! But it was actually something I discovered I needed to do, as I was doing it. And I couldn’t be more pleased with the way it turned out. 🙂 Even the glazing didn’t disappoint me (which happens more often than I care to admit)!

So here’s to not always letting craft trump art! And also, to finding the time to nurture both 🙂

One of the things I love about Seattle is the music scene. And the Seattle scene is home to my very favorite-est local band ever, “Awesome“.

I was first introduced to “Awesome”back in…’05 I guess it was. My roommate worked in the same office as the trumpet player and brought me to my first “Awesome” show at the Rendezvous in Belltown. And what a show it was. The tiny side room they played was packed, and we couldn’t even sit on the floor at the front because it would interfere with the theremin . But man what a night. I didn’t know what I was in for, and also didn’t know that in the years since I would attend countless (because I haven’t kept count) shows that “Awesome” has played.

{an “Awesome” performance at Sasquatch that I missed because I thought they were playing a half-hour later!}

And since I’ve focused so much on Wedding stuff on this blog o’ mine, I might as well tell the story of how “Awesome” saved a relationship.
The folks who knew M & I when we first started dating know that our early courtship was…well…not perfect. In fact, our relationship had several points at the beginning where it seemed it had ended. BUT that was not to be our fate. In May of 2006, we had come to a pivotal point – M had reached his limit and had made up his mind to end things between us; and I (who had been keeping M at arms length) had finally decided that I was being cruel and that I would let M in a little. We had already planned a date that week – this was a crucial day.
Our date was: I had bought tickets to go see “Awesome” perform their new musical theatre experience entitled NoSIGNAL. At the last minute my roommate decided to come too (a move that M saw as a female defense tactic).

Long story short, we had such a fantastic time seeing “Awesome” perform NoSIGNAL (it was M’s first time experiencing “Awesome”), and with my renewed dedication to making things work, our relationship continued to grow, until this very day, where M & I are engaged to get married! Funny how things work out…
Our dating anniversary (and we both independently chose this day) is the day we saw NoSIGNAL, May 6th  (2006) (even though we actually met and had our first “date” back in April of ’05!).

So there you have it, a little intertwined history of M & me and “Awesome” the band. And I hope we’ll have many more opportunities to see them play their music and perform theatrics. 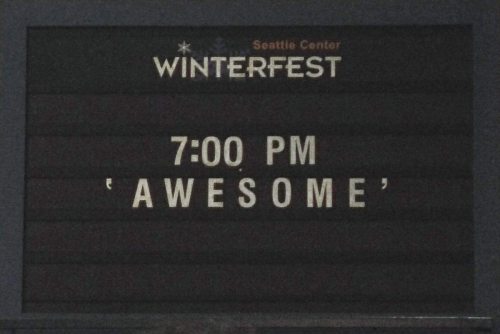 By the way…I heard a little rumor that “Awesome” will be releasing their 3rd CD at Chop Suey (Capitol Hill) February 6th. I haven’t confirmed this yet, but you can be sure, that if this is correct I will definitely be there!

I’d like to introduce you to Clement – my beloved jade plant. I enjoy all kinds of plants, but there is something special about jades – they are just so easy to love! Those big fleshy leaves, bright green color, so easy to care for. They just seem cheerful!

Starting my final year of college back in ’03 I became fixated on the idea of having a jade in my dorm room. I assumed this would be no problem to do, since back home you could find these little guys in any grocery store with a plant section. However, attending a school in northern Indiana, I found out that they would not be so common. After treking around to general stores and every nursery in the area, I almost gave up hope. But at a last resort, I found my little jade through Ebay (of all places). A fellow in California mailed him out to me, wrapped in damp newspaper. Here’s Clement when I first got him. 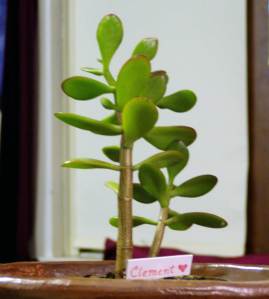 I named him Clement, for my grandfather, who had passed away relatively recently. I hope you won’t think it disrespectful of me. It was a way for me to keep his memory close.

So it’s been several years now, and Clement is still with me, going strong (even after many moves, one being cross-country in a van filled with stuff!). And it’s been so fun watching him grow, and even propagating a few mini-Clements along the way. Here he is now in our living room window. 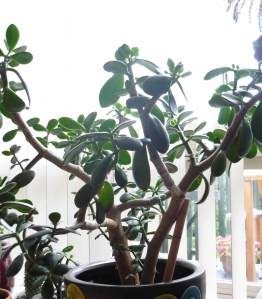 Isn’t he huge?? My hope is he’ll grow into a huge tree (they can get quite big, with huge trunks), and my best hope is I’ll get him to flower one day. Jades bloom so beautifully! Clusters of tiny star-shaped flowers that are so sweet. This is why I named my Etsy site Jadeflower – for the hope that the most precious and beautiful things are yet to come, but always hoped for. 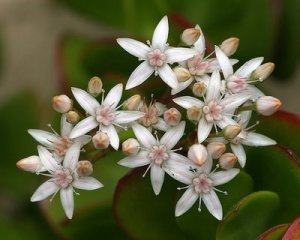